From California almonds to Georgia peach mints, FFA members from across the country represent their states in the Hall of States at the 91st National FFA Convention & Expo.

This year, 30 states are present in the Hall of States, including Puerto Rico. Like other booths, Puerto Rico offers treats for guests to enjoy including candies made with sesame seeds or guava and coffee, said Chadriel Cordero, Puerto Rico FFA State Reporter from Aguada, Puerto Rico.

“We have a good diversity of things in Puerto Rico that we cultivate,” Cordero said, referencing the produce on display, which includes ginger, hot peppers and limes. 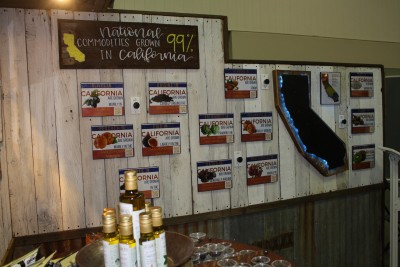 On a wall in California FFA’s booth, sections of a metal cutout of California light up when visitors press a button, indicating where certain commodities are grown.

Another state booth bountiful with food samples is California’s display. Booth visitors may sample almonds, olive oil, dates, figs and more, as well as learn where those foods are grown.

“We have one wall with some of our most popular California-grown commodities, and we have a map here that was laser cut by a friend of the chapter,” said Jackson De Jager of the Stone Ridge Christian FFA Chapter in Merced, California.

At the press of a button, lights on the metal cutout of California indicate the areas of the state in which certain foods are cultivated.

“There’s so many different climates in California because it is so large,” De Jager said. “We can grow tons of different commodities, so we get a really good variety [of] learning as well as just growing and seeing what we can do in California.”

Most Hall of States booths are staffed by high school FFA members, so it is rare to see middle school FFA members at national convention. However, middle school students from Wilbur S. Pence Middle School are greeting guests at Virginia’s booth. There, Virginia FFA members encourage visitors to answer trivia questions and learn more about agriculture in their state. In return, they can earn lollipops, temporary tattoos, pencils and stickers. 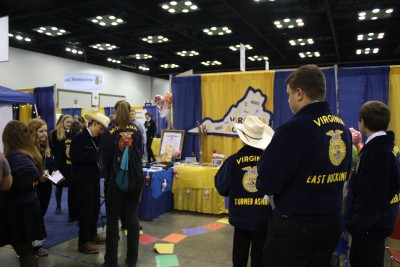 FFA members gather around Virginia’s booth at the Hall of States on Oct. 25, 2018.

Austin Casarrubias of the Turner Ashby FFA Chapter in Dayton, Virginia, said he thought he would never get to come to national convention.

“It’s been a good program,” Casarrubias said of FFA. “It’s not just learning. You have fun, you get to do things—I mean, we got to come here! Being part of the FFA really encourages you to do more, so getting involved that in that made me want to stand out and be leader, which is why we’re in leadership,” Casarrubias continued. “My grades have improved; everything’s just improved overall.”

On Wednesday, judges viewed the Hall of States booths. The first place winner will be announced Thursday at 3:30 p.m.

Dene Dryden is a junior at Kansas State University studying creative writing. An alumna of the Palco FFA Chapter in Kansas, she is serving as a reporter for the 91st National FFA Convention & Expo Newsroom Crew.