When Isaac Nelson started his supervised agricultural experience (SAE), he had two registered Holsteins and a solid grasp of the business side of dairy farming. The fourth-generation dairy farmer in Sleepy Eye, Minn., felt less confident about the future of the industry.

“On the smaller farms, a couple of bad years could either make or break you,” he says.

Nelson, 19, has been helping his parents on Olmar Farms since he was a child. While feeding calves and cleaning pens are essential farm chores, Nelson wanted to focus on diversifying farm income for his SAE. He started doing embryo flushing and semen collection during his senior year at Sleepy Eye High School. 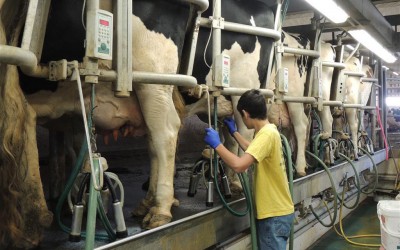 Semen collection allows Nelson to capitalize on the genetics of his strongest bulls. In embryo flushing, fertilized eggs with XX chromosomes are implanted into milking cows to increase the number of heifers born on the farm.

“Embryos are a good way to make money, and it helps me reproduce my herd fairly quickly,” Nelson explains.

While most students at Sleepy Eye High School were focused on expanding their herds or increasing the protein and fat in their milk to command higher prices, Nelson’s project offered a different perspective on a diversified dairy operation, according to agriculture teacher and FFA advisor Mary Hoffmann.

“Isaac has a lot of high-quality show cows in his herd and to be able to diversify and come up with new ways to make more money in an industry that, right now, is very tough, was very creative,” she says.

In 2018, Nelson won the National FFA Dairy Production Entrepreneurship proficiency award for his SAE. By the time he applied for the competition, his herd had grown to nine cows.

“Even though my operation was small — the other finalists had upwards of 30 cows — the embryo flushing and semen collection helped me stand out,” Nelson says.

The win was also educational for other FFA members, Hoffmann says, because it proved it wasn’t the size of the operation that mattered to judges.

“A lot of times people think they have to have this huge project and these monstrous numbers, and that’s not always the case,” Hoffmann says.

Nelson, who just completed his freshman year as an animal science major at the University of Minnesota, hopes to work on the family dairy farm when he graduates. He believes embryo flushing and semen collection could provide opportunities for the future of the farm.

“The win helped me realize that all of the hard work and effort I’ve put into it is paying off, and that I’m doing something right with my operation,” Nelson says. “The most important thing is working hard and not giving up.”