How to Become a Chapter Officer

Do you have what it takes? You probably do! Get 12 tips from five National Teacher Ambassadors for FFA who have guided more than 700 chapter officer candidates and interviewed more than 300 of them during their 71 collective years of teaching.

Tell your story. When I interview officer candidates, I want to know about them, about a time when they’ve been a leader,” says Josh Bondy, an advisor at Paris FFA in Paris, Mo. “I preach and preach to students: You must be memorable. You need to be able to tell the judges some-thing about yourself that makes you stand out from other candidates.” 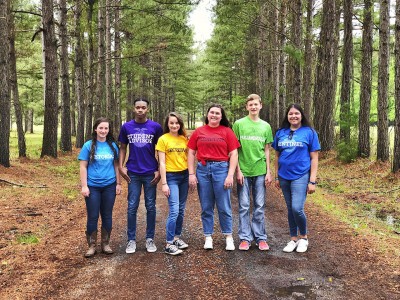 I’ve had everyone from valedictorians to students who were in the bottom 10 percent of their class [academically] who’ve been great chapter officers,” says Abby Readshaw, FFA advisor at Four County Career Center in Napoleon, Ohio.

“The main thing you must demonstrate is your desire and will to do it. I can help with the technical stuff, but you have to want to do it.”

Readshaw says students who can stand to improve academically can still be exceptional chapter officers if they excel socially. “If you know how to get up in front of people and help run an FFA meeting, and you understand how to guide your peers vs. telling them what to do, you will do well.”

You don’t have to be the world’s best public speaker. You can also be a quiet leader,” says Jodi Riedel, FFA advisor at Wakefield High School, in Raleigh, N.C. “You need to be driven, creative, able to work well with the team and be a really good communicator. But there are also remarkable chapter officers who aren’t comfortable in front of a crowd.”

Riedel says their chapter secretary is originally from Kenya, and though presenting in front of an audience remains a bit overwhelming for her, her organizational skills and keen attention to detail make her a perfect fit on the officer team.

Bondy agrees. “If you’re not a polished speaker, don’t let that stop you. Those skills will come.”

If you’re planning to run for chapter officer, she recommends finding out the required duties for that position. Then prepare for your interview and create a brag sheet, or resume, to share with the panel when you are interviewed. You can even use the FFA Resume Generator at FFA. org/Resume. Gudderra’s candidates have panel interviews, during which they’re asked to share their interest in the office, discuss their participation in a team activity and then answer multiple interview questions.

The interview process can trip up even the most enthusiastic candidates who are unprepared. Riedel strongly suggests visiting FFA.org to download the Sample Officer Interview Questions. Review them, consider how you’d respond to each and then practice answering them.

“You need to check your ego at the door and understand that being a chapter officer isn’t about the title,” says Kevy Mendes, FFA advisor at Exeter Union High School in Exeter, Calif. It shouldn’t matter what position you have; you’re part of a team first. If you’re willing to work hard to get the job done and have some grit, you can accomplish anything.”

Mendes says there’s a place for everybody in FFA, and it takes a lot of different personalities and leadership styles to accomplish the goals of chapter officers. “I tell my officer team, ‘One person can’t make some-thing extraordinary; it takes multiple people to do that. Embracing other people’s strengths and weaknesses and building others up is how to reach your goal and have success.’ ”

Being a chapter officer requires more FFA involvement, but the amount varies from one chapter to the next. Riedel recommends you find out the commitment expected and decide if you have the time it takes. Her officer team puts in five additional hours a week, on average. “There’s a lot going on when you’re in high school — activities, sports, jobs, relationships, family commitments and a lot of drama; it’s high school,” she says. “You can’t have it all, so you have to make decisions based on your priorities. During the interview, if you tell us your top priority is FFA, then you need to be true to that.”

However, advisors encourage their officers to man-age their time to include other activities.

“We want our students to be involved in a lot of other things so they’re more well-rounded students,” Mendes says. “We help them adjust schedules to make this happen when we can.”

“We never want to bombard them with so much activity that they can’t do other things beyond FFA,” Bondy adds.

Not sure if you’re right for the role? Shadow your chapter’s officers to get a better feel for what they do. “Let your advisor know as soon as you think you might be interest-ed in running,” says Bondy. “Then reach out to current officers and become involved in every FFA activity they do. Ask for additional responsibilities. At the end of an event, if they stay to sweep floors, pick up a broom and do the same, or whatever the task may be.”

Riedel says advisors want to be confident that you can work well in a group. “FFA is not run by the president alone. It is run by the entire officer team, so you should be able to show us you are team-oriented,” she says. “Playing sports or being in organizations like the Boy Scouts are good examples. A perfect way to also become part of the competition process would be a career development event.”

Chapter officers have admitted they didn’t realize all they would enjoy in their roles prior to election. “Our members are prepared for the commitment and work involved, but they’re shocked at how much fun they have,” Bondy says.

According to Mendes, it’s an eye-opener for some chapter officers to learn all the behind-the-scenes planning that goes into hosting a successful meeting. “Many officers lead from behind (not in the spotlight) to ensure things get done. Some members think being an officer is about leading the group and posing in pictures.”

“If you are thinking about running for a position, just do it. You have nothing to lose, but you have everything to gain,” says Readshaw. “It sounds cheesy, but it’s true. It just comes down to ‘Are you willing to do it for your chapter, or do you want other people to do it for you?’ ”

“I tell the students we have to prepare for that,” says Bondy. “We talk about what they are going to do the next morning and what’s that going to look like if they don’t get elected. They’ll say, ‘The next morning the sun will come up, I will go to school and I’ll start over.’ ”

Gudderra has wise advice for members who aren’t elected. “Although this wasn’t the right time, that does not mean it will always be that way,” she tells them. “It’s important to know that you did your best and you are now better prepared to try again next time.”

Mendes sees it as a learning experience for FFA members. “Don’t let this deter you from doing anything in FFA,” she says. “Try again; take more opportunities. One election does not define you. There are plenty of adults in the world who go to job inter-views and don’t get hired, and they still have to go to more interviews. It’s about figuring yourself out, trying harder and making yourself better so the next time you’re a stronger candidate.”

Riedel also recommends trying again but starting with something smaller like becoming a committee chairperson. “That way, you’ll come back and have a new success on your resume that you can talk about in your next interview. Don’t give up; see it as a growth opportunity,” she says.