Most of the members from the Southeast Polk FFA Chapter who boarded a flight to Beijing last March had never been on an airplane. No one from the Pleasant Hill, Iowa, group had ever traveled outside the United States.

“I had a preconceived notion of what China would be like,” admits sophomore member Abby Wing. “I thought it would be more like ancient China that we studied in school, so it surprised me that the agriculture and technology were so advanced.” 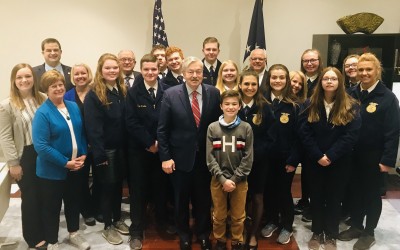 The 10-day trip to China was part of their International Learning Opportunity and included visits to Syngenta Biotechnology Innovation Center, Corteva AgriScience and a John Deere manufacturing plant in Tianjin. The students also met with Terry Branstad, the U.S. Ambassador to China, at the United States Embassy, and they received a briefing from the Foreign Ag Service (FAS) division of the USDA.

The FFA chapter started talking about international travel in March 2018. The students spent a year fundraising for the trip, raising more than $23,000 to help cover the costs of their international adventure.

“There is a huge amount of agricultural connection between Iowa and China,” says Agricultural Education Instructor and FFA Advisor Matthew Eddy. “We decided to go to China before talk about the tariffs started. When that happened, a trip to China became a lot more interesting.”

Getting a firsthand look at agriculture on a global scale was a highlight of the trip for Wing. During a tour of the greenhouses at Syngenta, she learned that similar production methods are used worldwide — and many of the plants growing in greenhouses in China are the same as the ones growing in Iowa.

Even Eddy learned something new during the international experience.

“It was really interesting that 300-horsepower tractors were being built in Tianjin, yet most of the farms in China are smallholder farms. There is almost nowhere in the country where you could even turn around a big tractor,” he says.

Sophomore Faith Johnson was surprised at how common it was to hear English spoken in China; even the street signs in cities like Beijing and Shanghai were in English. During a visit to a local school, FFA members met with students who’d been learning English. “The students really valued other languages,” Johnson recalls.

The FFA chapter is already talking about its next International Learning Opportunity. Students hope to visit several countries in Western Europe in 2021.

“I thought it was really interesting to experience how one 10-day trip can change your life,” says Morgan Schmidt, 18.

“I think it’s important for FFA members to travel internationally, to learn about different cultures,” adds Wing. “It builds you as a person and prepares you for the future.”