Tennessee Alumni Are “Rooted” in Sustainability

In a culture increasingly interested in the source of products, Pugh Farms is a bit of a trendsetter. The fifth-generation cotton, corn and soybean operation in Halls, Tenn., has had “sustainable” in its mission statement for decades.

“It’s about taking care of the land for future generations,” says Eugene Pugh III, who comanages the farm alongside cousin Steve Pugh II. “People are just starting to catch on and understand the importance of sustainability. I think it’s great.”

Wrangler celebrates the Pughs’ practices — and an overall trend toward sustainability awareness — with the Wrangler Rooted Collection, a line of jeans and tees made with the family’s cotton. “A nod to the tireless work ethic and responsible land stewardship of America’s cotton farmers,” says the brand’s website. The Rooted Collection represents five states, with one local cotton producer for each. Each pair of jeans has patches and embroidery to signify the state where the cotton in it was grown. 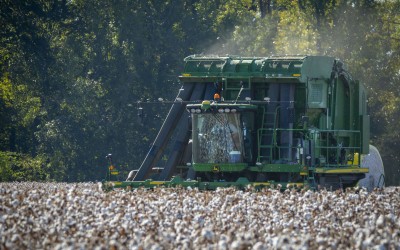 The collection hit shelves in summer 2019, but the process began roughly three years earlier with the Pughs’ seed supplier, BASF, manufacturer of Stoneville cotton varieties. The Pughs are part of the company’s e3 sustainability program, which connects farmers who grow “socially equitable, economically viable and environmentally responsible” cotton with brands that want the same.

The key practice qualifying the Pughs for the program is their use of cover crops. “It’s very beneficial to the land,” Eugene says. Not only do cover crops improve overall soil health, but also they help prevent erosion, conditions that are vital for the 10,000-acre farm situated on the banks of the Mississippi River. Additionally, they can suppress weeds and provide natural fertilizer, which reduces the need for chemical sprays and cuts back overhead costs.

Eugene and Steve learned farm-management skills firsthand from watching their fathers, and FFA served to reinforce those backyard lessons, Eugene says. Both were members of the Halls High School FFA Chapter during their four years of high school — the same years they began working on the farm. Eugene would drive the equipment when he was at home, then win cotton-yield competitions in the classroom; the experiences went hand-in-hand.

While Eugene’s plan was always to take over the land the family has farmed since the late 1800s, he says what he learned in FFA could have taken him anywhere. “The lessons you’re learning are life lessons,” he says. “They may pertain to agriculture, but you’ll be able to use them for years — in whatever job you have.”