Women in FFA: Leading the Future of Food Production

Since 1928, the National FFA Organization has expanded from 33 boys from 18 states to millions of agriculturalists from 52 U.S. states and territories. Could the next great move to increase membership include agriculture students from another planet? Dr. Gioia Massa, a NASA botanist, believes there may one day be FFA members on Mars.

“Agriculture has promoted civilization to be what it is today,” Massa says. “We aren’t going anywhere without agriculture and certainly not as an interplanetary species. When we have colonies on the moon, on Mars and in deep space, we will need robust agricultural training, which includes FFA.” 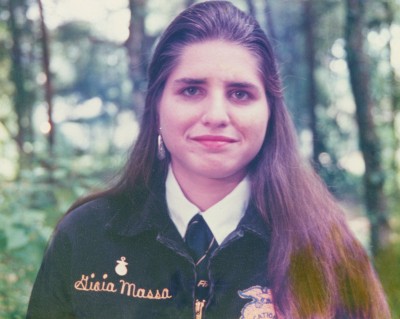 Massa first became interested in growing plants in space as a seventh-grade member of the DeLand FFA Chapter in Florida. Her FFA advisor attended training at the Kennedy Space Center. His ability to bring back nearly 40 hours of research footage from NASA and the Epcot Center sparked Massa’s interest in plant science, and soon space agriculture became the foundation of her vision for the future.

“As a child in the 1980s, space exploration was a passion that our generation shared,” Massa says. “The fact that there was such a thing as space agriculture opened up my ideas of the future. Our chapter went on to try and develop a collaboration with the Young Astronauts program. We went into elementary schools and talked about agriculture by explaining how toys work without gravity and how it might impact the way plants grow, too.”

Today, as a life sciences project scientist in the field of exploration research and technology at Kennedy Space Center, Massa looks for ways to feed astronauts. She has led the science team for vegetable hardware validation on the International Space Station, and she leads research on fertilizer and light impacts on the nutrition and flavors of vegetables. Further out, she will look at staple crops like potatoes, soybeans and wheat to determine how to achieve a sustainable diet for space exploration. Without the influence of her FFA advisors and their willingness to nurture her curiosity for plants, astronauts might still be limited to packaged meals.

“I want people to know that I am really grateful for everything FFA provided to me as a student,” Massa says. “Because of this organization, I was able to find my passion, try a lot of different contests and activities, and learn how to communicate effectively, which is the most important job of a scientist.”

NASA isn’t the only place that needs innovative agriculture scientists. If you are interested in learning more about the science, technology, engineering, and mathematics careers available in the agriculture industry, visit AgExplorer.com to learn more.