Loren King never imagined that he would be where he is today. As a shy, inexperienced eighth grader entering his first agricultural education class, he didn’t even want to talk to his agriculture teacher.

King started his FFA career through agriscience projects with his brother, which eventually developed into personal projects with drone technology. His individual work earned him the honor of being a Star in Agriscience finalist in 2017.

“When I joined my FFA chapter, I was able to refine [my passion] over time and find out what I really wanted to do,” King says. “I was able to develop the knowledge that I wanted to have as I moved into college and then later into a career.”

King is in his final semester at Michigan State University, where he is pursuing a degree in non-formal agricultural education and environmental systems and sustainability. He already has a job lined up after he graduates with IN10T, a start-up company that runs farmer trials for clients that want specific products tested. The company takes the trial data and transforms it into something that’s usable for the customer. That’s where King comes in. 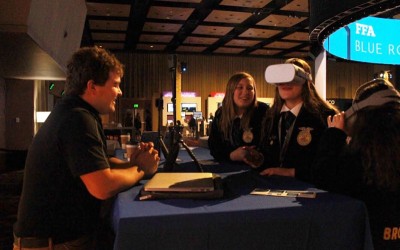 “Right now, I serve as our media consultant, but in January, once I graduate, I’ll take the position of digital media lead,” King says. “My role specifically will be to take what we’ve learned and turn it into a usable, interesting format, like video or virtual reality.”

King attributes his career success to his time spent in FFA. He grew to become an excellent public speaker and critical thinker. He says it’s easier to speak about his passion and that makes it easier to spread the word about agriculture.

The Power of Networking

King emphasizes the importance of attending conferences and conventions to network.

“I actually got my current position by going to a college-level agriculture conference, and I felt that I should attend because of my time going to the national FFA convention, the state conventions and Washington Leadership Conference,” he says.

King served as the chair for the Infusing Agriculture Technology Committee at 89thNational FFA Convention & Expo in 2016. His committee was charged with evaluating the efforts FFA has taken to promote technology in agriculture. The 70-person committee decided that more needed to be done, which became its recommendation.

“There were directives in the committee report to have more experiences at convention involving technology,” King says. FFA took that feedback and more, and created the FFA Blue Room. “It brings people together in one place, with a more concentrated experience with technology.”

King is representing IN10T in the FFA Blue Room this year, and he says the opportunity is like no other. The FFA Blue Room is sponsored by AgriNovus Indiana and Microsoft, and offers students and inside look at some of the newest technologies being utilized in agriculture.

“The Blue Room is like if you took a Ted talk and shoved it in the middle of a technology wonderland,” King says. “There are all kinds of technology around the room that you can tap in to. You get to hear from speakers who have prepared something more focused for our generation.”

King started his journey not knowing what he wanted to do in life, but he found his future in FFA. The eighth grader who didn’t want to speak to his own FFA advisor has now helped give the FFA Blue Room a voice.