The news that 11-year-old Addison Auza suffered a brain bleed and slipped into a coma devastated the community in Maricopa County, Ariz.

“It was so shocking because we’d just seen her showing sheep and having fun, and then we found out she was in the hospital,” Hunt recalls. “I thought she would have such a bright future in the sheep world.” 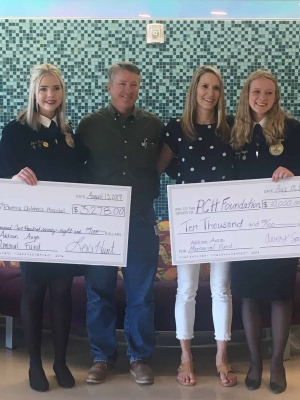 After Auza passed away in December 2018, Sawyer and Hunt wanted to do something to honor their friend.

“We are a show family,” Hunt says. “We wanted to do something to make sure her memory would live on.”

The two won both grand and reserve champion titles at the Maricopa County Fair last spring (Sawyer won for carcass lamb and Hunt for market lamb), and they donated their prize money to the pediatric intensive care unit at the Phoenix Children’s Hospital.

Their winnings, together with donations from the community, totaled $15,000. The hospital used the funds to support programming and to purchase interactive kiosks for the waiting areas so families can play games while their loved ones receive treatment.

“Addie’s little brother spent so much time at the hospital, and the staff in the ICU played games with him to make the time pass,” Sawyer says. “[The kiosks] are a small thing to make the days better for families during hard times.”

The donation was not part of an official FFA program, but Buckeye Union High School agriculture teacher and FFA advisor Melissa Veo hopes that the leadership skills and focus on community service taught in FFA played a role in the decision to honor Auza.

Hunt credits FFA for giving her the opportunity to show sheep, which fostered her connection with Auza.

“FFA has taught us the importance of giving back to the community,” Sawyer says. “It was such an incredible feeling to know that we could have an impact. I wish the circumstances could be different, but it showed us that bad situations can lead to good things.”