After Hurricane Florence hit the Carolinas and Virginia in September 2018 and resulted in catastrophic flooding and severe damage across the three states, members of the Lakewood FFA at Lakewood High School in Salemburg, N.C., sprang into action.

Chloe Hobbs, the chapter’s reporter, suggested the Lakewood FFA organize a schoolwide food and supply drive to help hurricane victims, and they immediately got to work. On September 30th, 2018, chapter members distributed collection boxes to 14 classrooms, and the students in each classroom’s first block of the day were asked to bring in canned foods, water bottles and hygiene products. 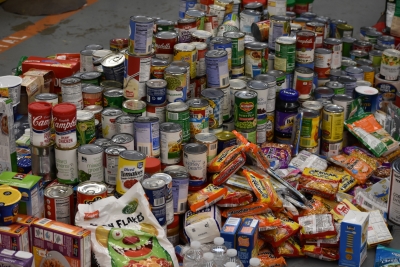 Hobbs says they hoped to secure 1,000 items by the supply drive’s end date of November 2nd, 2018, but their fellow students and teachers went above and beyond, ultimately contributing a total of 1,426 items to the cause.

“We made the Lakewood FFA Hurricane Supply Drive a competition to see which first block could generate the most supplies, and I think that’s a big reason it was so successful,” Hobbs says. “My first block actually won the contest, bringing in 393 items, and as a reward, we brought in donuts from a local Dunkin’ Donuts. The whole experience was incredible; we still can’t believe how many people participated.”

The chapter delivered their collected bounty to the Christian Food Bank of Salemburg shortly after the drive ended.

The effort was largely coordinated by Jana Hunter, the Lakewood FFA Chapter’s secretary.

Although many of the items will be distributed to Hurricane Florence victims, some will also go to Florida to help those affected by Hurricane Michael.

“FFA has opened so many doors for us to serve others as a chapter and as individuals,” Hobbs says. “With Hurricane Florence in particular, we felt that this was an opportunity for us to make an impact in our state and live out the theme announced for the 2018 National FFA Convention & Expo, ‘Just One.’ Just one can of food can provide a meal for someone in need, for example, and if everyone donates just one item, together we can make a big difference.”

Harrison McLamb, president of the Lakewood FFA, echoes Hobbs’ sentiments and he says he feels humbled by the way the entire school helped the chapter reach – and exceed – their goal.

“Seeing so many students pitch in at our school, including many who aren’t in FFA, has meant the world to us,” McLamb says. “We’re excited that we were able to inspire our student body to get involved in a wonderful cause, and we hope to provide more opportunities like this in the future.”

Learn more about FFA crisis relief efforts and contribute to ongoing causes in communities across the nation.