Even though fourth-generation sugarmaker Henry Sarafin had been helping boil sap into syrup on his family farm in Chesterfield, Mass., he still looked forward to taking a sugaring class at Smith Vocational and Agricultural High School.

“I wanted to help teach other FFA members about sugaring and get them to feel as excited about it as I do,” he says. 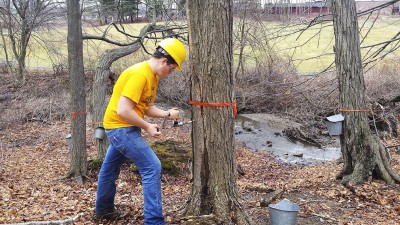 The sugaring class at the school includes lessons on forest management, syrup production, sales and marketing. Students are responsible for all aspects of the process, from tapping trees and collecting sap to boiling it in to syrup and selling the finished product. It also engages students in an age-old agricultural tradition.

American sugarmakers collected sap from 13.3 million taps and produced more than 4.24 million gallons of maple syrup last year, according to the United States Department of Agriculture. Several FFA chapters in the Northeast have established their own forest of sugar maple trees, known as a sugarbush, to learn about the rewards and challenges of making their own maple syrup.

“Sugaring is a good transition from the classroom,” he says. “It gets students outside to do something cool and helps them understand the hard work that goes into making maple syrup.” 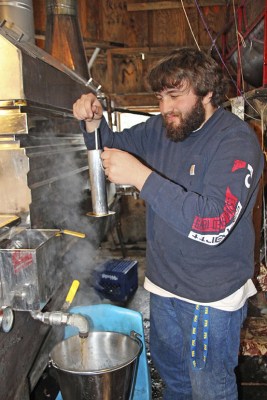 In Whitefield, N.H., the sap runs for less than six weeks, and Paradice FFA members at White Mountains Regional High School work at a frenzied pace to collect sap from 300 trees and boil it down in their onsite sugarhouse, a small cabin where the maple sap is boiled. FFA Alumni Dustin Peterson, 20, and Cloe Bean, 18, often worked late into the evenings to keep the evaporator running.

“The season is short and intense,” says agriculture teacher and FFA advisor Jenn Scarinza. “You are trying to seize a very fleeting opportunity when Mother Nature dictates, and you have to work together to get it done.”

At Smith Vocational and Agricultural High School, even alumni pitch in during sugaring season.

Students collect sap in buckets, hanging from up to 40 sugar maple trees on campus, but the school lacks its own sugarhouse to process the sap into syrup. Students boil some of the sap over an open fire, which ensures that FFA members get hands-on experience. Most of the sap is transported to a local sugarhouse, where an FFA Alumni member boils it down and bottles it for the chapter. The chapter collects 350 gallons of sap and produces an estimated nine gallons of syrup.

“Most of the students in our program do not come from ag backgrounds,” Anspach says. “They learn a lot about how finicky the season can be and how many hands it takes to get maple syrup from tap to table. They also get to see how much community support there is for agriculture.” 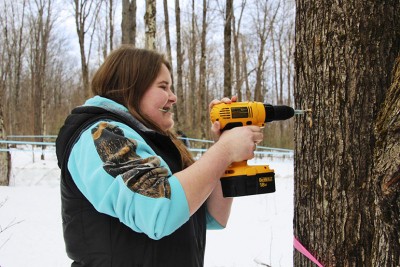 Proud of the Product

Peterson admits that fellow FFA chapter members teased him for carrying around a pint of syrup and spoons at the National FFA Convention & Expo and encouraging FFA members from other schools to try a sample. The former state officer took the good-natured ribbing in stride because he is proud of the work Paradice FFA members did to produce their own maple syrup.

“I spent so many hours after school tending to a fire just to make three extra gallons of syrup,” he recalls. “I wanted to show off our hard work and introduce FFA members to the concept of real maple syrup.”

Local communities get excited about the operations, too. The Wamogo FFA in Litchfield, Conn., taps 100 trees on campus and boils it in an oil-fired evaporator. A local sugarmaker helps out with technical issues and problem-solving during the process. 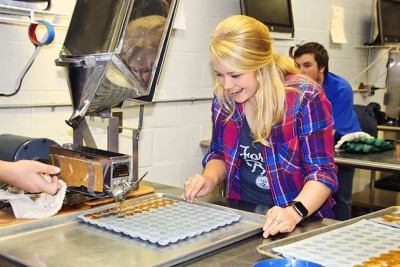 The finished syrup is sold in the on-campus ag store, where parents, staff and neighbors stock up on the sweet confection, and the revenue from syrup sales supports FFA events and scholarships.

Following the journey from production to consumption helps students learn the realities of agricultural production, according to assistant principal and FFA advisor Charles Rowland.

“The entire production is student-driven; the teachers keep things running in the right direction, but students do all the work,” Rowland says. “They see how much work goes into producing a single gallon of syrup.”

Some students take their devotion to maple syrup to the next level. Peterson created a business plan for a maple syr