FFA holds a special place in the heart of David Hollinrake, the president of Syngenta Seeds North America. He was a member in the 1980s.

“I will never forget my roots,” Hollinrake says. “The two programs that enabled me to develop the most were FFA and the Alpha Gamma Rho fraternity. They created a connection with people that I’ll never forget.”

When Hollinrake, who was  member of the Aledo FFA, which later became the Mercer County FFA, discovered that members of the Mercer County chapter would attend the national FFA convention, he arranged to meet with them. He shared his own story to illustrate how FFA opportunities propelled him into the career path that lead to his current position with Syngenta Seeds. 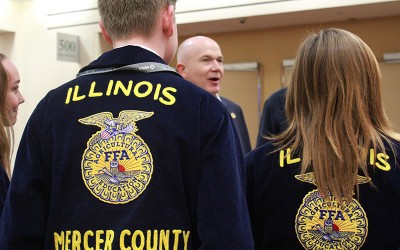 “Anything you want to do is possible,” he said, “and the leadership opportunities that you have by wearing this jacket and being affiliated with 700,000 people is amazing. Take advantage of it.”

“Imagine a freshmen in high school who can’t get up in front of the room and speak,” Hollinrake continued, speaking of his own personal experience. “FFA created the confidence to enable me to do so much.”

Part of that confidence came from serving as the Aledo FFA Chapter president. Hollinrake notes that he was honored by his peers’ trust in him to lead the chapter and represent them at the annual banquet. He adds that seeing how proud his family was of him made the experience that much sweeter.

He has watched FFA grow for over four decades, and he believes the future for the organization is bright.

“Being able to rub shoulders with 70,000 students here this week is an experience that I don’t think anybody could have envisioned in 1988,” Hollinrake says. “We’ve been able to really broaden the brand. This encourages people that may not be involved in production agriculture to really get active in understanding where and how their food is produced.”

“I think one of the biggest things he conveyed to the kids was his story,” says Mercer County FFA advisor Mike Chausse. “He started out in a small northwestern Illinois town, and now he’s the president of a large agricultural company. He told the kids about how FFA helped him get there.”

“It shows that anybody can come from anything, and that’s what FFA is about,” Benson says. “Anybody can be a part of something.”

What resonated with her the most was a message of passion and how crucial that is in agriculture. Benson is passionate about animal genetics and plans to pursue her dream career in the field after graduation.

“Agriculturalists are passionate,” Benson says. “People in FFA do things for other people just to do them. It’s a community and culture. It’s not just a workplace.”

Hollinrake concluded by asking each member about their future plans and offering his personal help to them. Each member was left better understanding the importance of remembering their roots, because, in the words of Hollinrake, where you come from helps make you who you are.