John Deere gave their first gift to FFA in the middle of World War II. Seventy-five years and more than $13 million later, the organizations are celebrating their partnership.

The milestone is being commemorated at the 91st National FFA Convention and Expo with a time capsule to be opened in 75 years, as well as a $75,000 donation from John Deere to the National FFA Organization’s Living to Serve Grants that provide funding for community service projects.

As the longest continuous corporate sponsor, John Deere has made an impactful investment in FFA. Bryant Mays, president of Delphi FFA in Indiana, spoke on behalf of FFA members at a press conference on Thursday, thanking John Deere for their support and “just how much of an honor it is that we have sponsors like John Deere to come alongside us over the past 75 years and support us through it all,” he said. 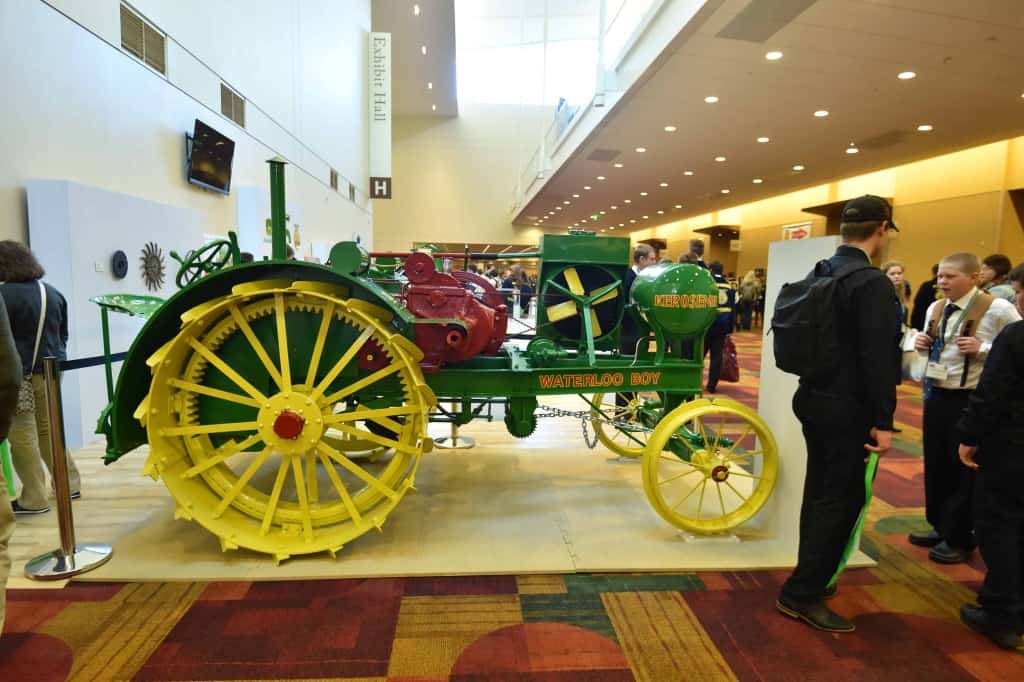 In addition to the time capsule, John Deere created a museum-quality display of items, from tractor parts to garden tools, that will be put into the time capsule. FFA members suggested the items  represent the past 75 years of agriculture.

“They have just been such wonderful partners in every sense of the word,” she said. “Their support has meant the world to so many kids.”

Mark Poeschl, CEO of the National FFA Organization, expressed his gratitude for the support of John Deere.

“Certainly their relationship with us and ours with them has been extremely important to the growth of FFA.” he said.

Poeschl went on to explain the powerful impact of the Living to Serve Grant.

“For every dollar that we invested in the Living to Serve platform, we generate over $1,200 in value for that community,” he said, “so we are able to take that donation and extend that so that it impacts a large number of people and gives great experiences to a wide group of students.”

Sam Allen, chairman and CEO of Deere & Company, explained that supporting the grants lines up well with the company’s focus: to offer grants and paid-time-off for employees who volunteer in their communities.

“The Living to Serve Platform inspires FFA members to put leadership into action through service activities and prepare them to be responsible leaders in agriculture and many other professionals in the future,” Allen said.

Matt Powell, area sales manager for John Deere Financial, is working at the time capsule display this week at the convention and expo because he wanted to show his support for FFA.

“It promotes an industry that is so vital to our well-being and our economy and one that’s very near and dear to my heart,” Powell said.

The anniversary of John Deere’s support for FFA means a lot to Powell.

“To me it’s just another piece of appreciation I have for our company to support an organization I see that really does provide a great benefit and is equipping the next generation of agricultural leaders,” he said.

Chris Boyens, brand standards manager at Deere & Company, is also at the time capsule exhibit, and he echoed Powell’s thoughts on John Deere’s contributions, saying he is proud of his company’s investment in FFA.

For more information on the Living to Serve grant or to apply, visit FFA.org/livingtoserve/grants/.

Martha Hoffman is a junior journalism major at Northern Illinois University. She is a member of the Earlville FFA Chapter in Illinois and is serving as a reporter for the 91st National FFA Convention & Expo Newsroom Crew.

The below audio interviews were provided by Alex Voichoskie.