After seeing a Facebook post indicating that Central California’s Valley PBS was looking for FFA chapters to feature on an upcoming episode of its show American Grown: My Job Depends on Ag, the Merced FFA from Merced High School threw its hat into the ring. To the chapter’s surprise and delight, it was chosen.

The episode, which first aired in January 2020, highlighted future farmers and the next generation of leaders in agriculture in California. It included the Merced FFA, the Golden Valley FFA from Golden Valley High School and Marysville FFA from Marysville High School. Each chapter demonstrated the ways it interacts and connects with agriculture. 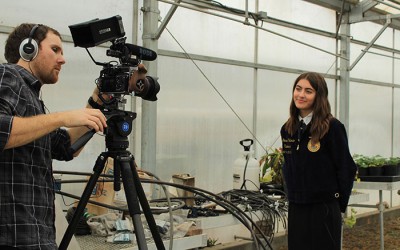 “It was such a great experience,” says Julia Brewer, the FFA advisor and agriculture instructor at Merced High School. “The students were so excited that our chapter was featured and for the unique opportunity to showcase the work they do on a large, highly visible platform.”

During filming, some Merced FFA members created floral arrangements, others tended to the plants in the school’s greenhouse, and students in welding classes used their tools and talents to create metal masterpieces.

“We wanted to show that ag education involves far more than classroom work,” Brewer says. “It’s hands-on learning or learning by doing, and that appeals to a lot of young people. Our aim is for Merced FFA members to leave high school both career- and college-ready, and we do our best to ensure they’re cultivating skills that can be used in a trade later on.”

In the episode, select students shared what FFA and ag education meant to them, including Merced FFA members Juan Salas and Lauren Palumbo. Salas mentioned the sense of pride he and his peers felt when they wore their blue corduroy FFA jackets, noting how it represented being part of something bigger than themselves. Palumbo discussed how FFA helped her understand the scope of the agriculture industry while it also helped her grow as a leader.

“I haven’t taken a ‘traditional’ approach to FFA and agriculture, because I’m more interested in the creative and communicative sides of ag than I am in things like animals and plants, which are more typically thought of when ag comes to mind,” says Palumbo, who serves as reporter for the Merced FFA. “I hope those who watch this understand that agriculture is truly multifaceted and feel inspired because there’s a place for everyone. I also hope the show helps viewers get a better idea of why ag education is important. As young people, we are the future of this industry, and we are in charge of where it goes.”