In the early morning hours of March 3, 2020, a succession of tornadoes ripped through middle Tennessee. The longest of the five stayed on the ground for 63 minutes, reaching 165 mph over 60.13 miles. At the midpoint of that devastating path was Mt. Juliet Christian Academy (MJCA) and its 5-year-old agriculture department, led by teacher and FFA advisor Brittany Barnett.

The school lost the entire second story, and the rooms on the first floor were flooded. Barnett’s personally provided electrical tools were corroded. Her entire curriculum and students’ SAE records were soaked. The courtyard used for landscape design was destroyed. The storage building was leveled. The official jackets they’d just finished fundraising for were thrown in the creek, embedded with fiberglass or lost completely. The sheep pens they’d just paid off were uprooted and “wadded up like balls,” Barnett says. 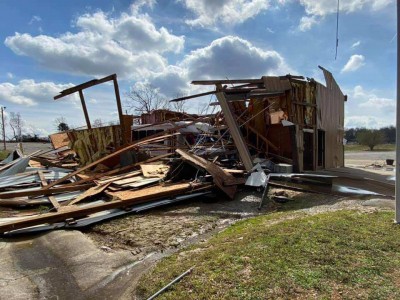 “It was a sinking feeling,” she adds. “I know it can all be replaced, but we can’t apply for grants because we’re a private school. All we had, all we’ve built – we’ve raised ourselves.”

There was one glimmer of hope. The makeshift-barn that housed the department’s Polypay sheep remained standing. “Everything that has mattered to my students was in that portable,” Barnett says. “If that had been leveled, I don’t know if we could have come back from this.”

The 24 sheep are now spread out across three farms in the Mt. Juliet area. (Six students, coined the “sheep squad” by Barnett, still provide all the labor.) And that’s just one example of how the agriculture community has stepped up for the MJCA FFA Chapter. FFA alumni have sent money and had planned to pay for a charter bus to the Tennessee state convention (cancelled due to COVID-19). The local farmers co-op has reached out to industry partners on the chapter’s b