Nine months ago, Eros Villarreal started to teach himself how to play the guitar. A quick and eventful journey led the Lasara FFA member from Lasara, Texas, to win the National FFA Talent Show at the 92nd National FFA Convention and Expo.

Friday evening, Villarreal took the stage at Lucas Oil Stadium in Indianapolis as the last act out of three talent finalists. With his guitar and his voice, Villarreal performed George Strait’s “I Cross My Heart.” Villarreal says he takes inspiration from Strait, but the first country musician he heard was Chris Young. His journey with music goes back even further.

“My mom kind of started [me] on ’80s rock like Metallica, AC/DC and Led Zeppelin,” Villarreal says. “My uncle is a musician. He’s always been, so I guess music runs in the family.”

Villarreal, a high school sophomore, has been singing his whole life, and he plays trumpet and percussion in his school’s band. He credits his band director for teaching him everything. “I would not be here if it wasn’t for her.”

Villarreal’s uncle gifted him a guitar, which he says he left sitting for six months before learning that he could sing and play at the same time.

As his skills advanced, his FFA advisor entered Villarreal in the district FFA talent show. He advanced from his district to the area talent competition, performing in front of an even larger crowd. After the area contest came state talent contest in Fort Worth. Villarreal performed John Denver’s “Take Me Home, Country Roads” in front of about 13,000 people. 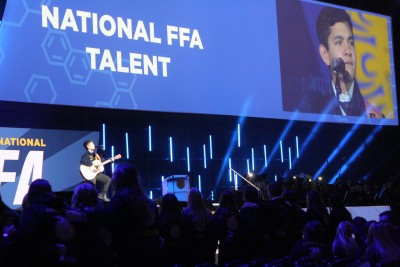 Eros Villarreal of the Lasara FFA Chapter in Texas performs at the National FFA Talent finals in Lucas Oil Stadium at the 92nd National FFA Convention. Photo by Dene Dryden.

“What amazed me so much also was that everybody sang along when I sang ‘Country Roads,'” Villarreal says. “I will never not stop hearing that. It was amazing. So then, after that, they announced that I won, so that was even crazier.”

The next step: Nat