When high school students Maria Koch, David Geray and Raphael Schilling entered the German National Young Scientists Competition in 2015, they had one goal: Design a project that is out of this world.

The students, who attended Edith-Stein School of Agriculture in Ravensburg, Germany, wanted to research whether plant cuttings could develop roots in space.

“Previous [International Space Station] expeditions have shown that plants can grow in space from seed,” Schilling explains. “We wanted to investigate whether roots, shoots and leaves would develop on cuttings in microgravity.”

It was their determination to carry out the experiment that attracted the attention of Sebastian Rohrer (pictured above, left) of BASF Agricultural Solutions in Limburgerhof, Germany.

“Their plan to send the cuttings into space took the experiment from science to innovation,” he explains.

The German chemical manufacturer agreed to provide funding, lab space and mentoring (but no assistance in designing the experiment) to the trio.

In 2017, the students and a team from BASF traveled to Florida to put cuttings from a creeping fig (Ficus pumila) on the SpaceX rocket bound for the International Space Station (ISS). The students prepared the plants under sterile conditions in the lab at Cape Canaveral.

The plants went into space in a container connected to a light source and environmental sensors to measure temperature, humidity, carbon dioxide and oxygen levels; a camera snapped photos and transmitted them back to earth.

The experiment didn’t go as planned. The launch was delayed and, once in space, the rocket had to undock from the ISS almost a week earlier than planned. The containers were also damaged on the flight. 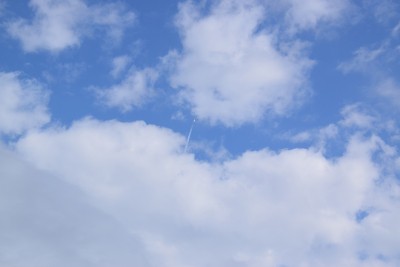 The rocket carrying the cuttings launches from Cape Canaveral.

Although more data is needed to understand how cuttings grow in space, the team still believes the project was a success.

Rohrer called it, “a science project with implications for modern farming” and believes the students, who have all graduated from high school and are pursuing degrees in agriculture at German universities, are the future innovators at companies like BASF.

BASF staff in Houston, Texas, drew inspiration from the project and teamed up with NASA on a follow-up project to encourage students to pursue STEM careers. The partners plan to create educational kits to allow students to conduct experiments on the effect of gravity and light on germination similar to the original ISS research. Educational kits will be available to students ages 7 to 17, including FFA chapters.

Schilling, who plans to take over the family farm growing crops like winter wheat, barley and corn, hopes that his project will provide inspiration to future experiments, explaining, “This kind of basic research is enormously important . . . so we can know whether vegetative reproduction is possible in space and how we can use it.”

Your Job Is Out of This World

Interested in a career that exposes you to opportunities like these? Learn more about the plant systems and biotechnology systems industries at AgExplorer.com.