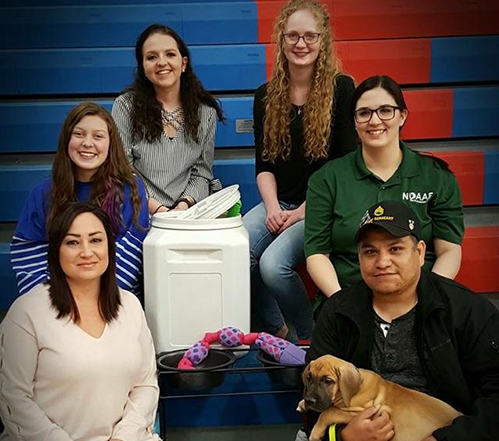 Through the Patriotic Puppy Project, the Center FFA Chapter came together and rallied its small North Dakota community to help change a veteran’s life.

The project began when Nikki Fideldy-Doll, the Center FFA Chapter advisor and agriculture teacher at Center-Stanton Public School in Center, N.D., saw a Facebook post from Mindy Weist, who owns Distinguished Danes – a Great Dane breeding operation – with her husband. In the post, Weist indicated she would like to donate one of her Great Dane puppies to a veteran in need. Fideldy-Doll immediately thought of her FFA chapter and how the members could get involved.

“Mindy had visited my animal science class in the past, so we already had a relationship,” Fideldy-Doll says. “I reached out and asked if we could help her once she found a veteran, and she was happy to have us on board. At the time, we had no idea how successful and impactful this project would be.”

A Perfect Fit
In early 2018, Weist found a veteran, Sergio Cuevas, a New Mexico resident and Purple Heart recipient who served in the U.S. Army for nine years before being medically discharged due to a multiple sclerosis diagnosis. 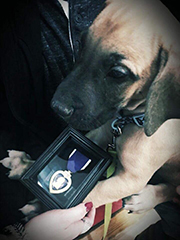 “Great Danes are wonderful service dogs due to their large size and temperament, and I knew Sergio would be a great owner,” Weist says. “He was a perfect fit for this project.”

Weist connected Fideldy-Doll and Cuevas, and the Center FFA quickly got to work raising funds to create a puppy care package for Cuevas. Over the course of two months, FFA members raised $180 in cash donations and received a variety of supplies from classmates, teachers and the community – dog treats, food and toys, for example – which was far more than they were expecting.

“We live in a very small town, and our school only has about 100 students,” Fideldy-Doll says. “But our FFA members worked hard, and I think the Patriotic Puppy Project showed them that a small group of people in a little town can actually make a huge impact on someone else’s life.”

When Cuevas came to North Dakota to pick up his puppy, he also visited Center-Stanton Public School and met the Center FFA members, who Fideldy-Doll says were excited to give him their care package in person. He was excited to meet them, too, and continues to be humbled by their generosity.